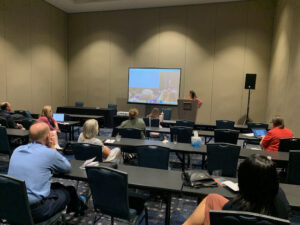 July was a very good month. The long-awaited American Foundation for Suicide Prevention’s Long Term Survivors of Suicide Loss Summit – postponed twice due to covid – finally happened and was an intense, meaningful experience on many levels.

Topping the list was getting to present my workshop on “Breaking the Family Silence,” where I shared my story, my inspiration for breaking my family’s 30-year silence, and the process I followed to do it. I had been scheduled to speak when the conference was first canceled, so this was a long-anticipated moment for me. I had a nice group who were very engaged and asked some really good questions. I also world-premiered the new promo video for The Silent Goldens documentary featuring the conversations with my family!

This was a full-circle experience of sorts, as this was only the second summit and I attended the first one just as I was beginning to break my own silence and start the process of speaking to my family. I floated the idea of doing the film at the first conference and received a lot of encouragement to do it and validation that it is an important story. I’m happy to report that I found the same interest and excitement for it this time and as it inches closer to being finished, I am more enthusiastic than ever about getting it done and using it as a platform to get people talking.

A big part of the experience was just being with others who have experienced the same trauma and sharing stories. Even though suicide is not a fun topic, loss survivors have an instant bond and I met so many fascinating people, so many of whom are doing work in the suicide community to prevent these tragedies and help those who are touched by them. I was surprised at how much more social I wanted to be than I typically am in wanting to keep the conversations going.

I am so grateful to the AFSP for holding this conference and to all those who attended and made it the incredibly special event that it was.

And to prove life is a rollercoaster in ways big and small, in one evening I won a nice sum of money at a local casino in downtown Cleveland and then proceeded to sprain my ankle walking back.