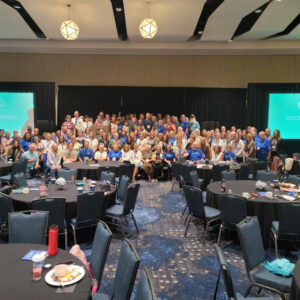 Even though I had lived with losing my mother to suicide in 1985, it wasn’t until 2015 that I discovered I was part of a community of people called “suicide loss survivors.” Intellectually I knew other people had lost loved ones this way, but it never occurred to me that I would feel a deep connection to them, one born of shared experience.

It wasn’t until I attended an Out of the Darkness Walk for Suicide Prevention put on by the American Foundation for Suicide Prevention that Fall (they are happening now, check out AFSP.org to find one near you) that I met others who had been through what I had but were willing to be open and talk about it, unlike my family had been for 30 years.  The relief I felt was instant, not just meeting people I could talk to but in finally telling my story.

I became deeply involved in the loss survivor world and was able to speak at a conference for long-term survivors this past July.  Pictured are those who attended.  I met numerous fascinating people, shared stories, and was impressed by the numerous and different ways people have dealt with their grief and used their experiences for good.  A friend of mine once said, “we can’t save our loved ones but we can save each other.”  And that’s how it feels.  Talking about it saved me from a path of misery and pain I was on.

One person I met was Janet Schnell. Janet is an LCSW who completed her master’s degree in Social Work in 2010 at the University of Southern Indiana. She is currently in practice with CareATC serving the needs of employees in a commercial furnishings company. Janet specializes in suicide prevention, intervention, and after a suicide occurs; depression; anxiety; and substance abuse. She has experience in Dialectical Behavioral Therapy (DBT), Cognitive Behavioral Therapy (CBT), Brief-Cognitive Behavioral Therapy (B-CBT), Motivational Interviewing, and Narrative Therapies. Janet is a suicide prevention instructor for Question, Persuade, Refer (QPR), She is a suicide prevention trainer for Applied Suicide Intervention Skills Training (ASIST). Janet is a founding member of the Retrospective Fatality Analysis – Consultants (RFA-C). The protocol is an investigative and research instrument with the goal to inform suicide prevention by using the stories of those who died by suicide. Janet is a public speaker sharing her experience as a suicide loss survivor and becoming a social worker after her brother’s death. She grew up as the middle child in a closely connected family of 7. Janet has been married for 38 years and has 1 son. Her hobbies include public speaking, gardening, and meeting people.