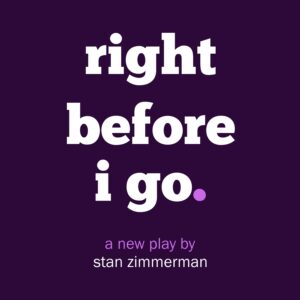 Creativity has been a source of surviving and healing for me throughout my life.  My career in television was fun and distracting, allowing me to avoid many of my not-so-fun feelings for most of my adult life. I took up painting when I was recovering from the depression that changed my life’s direction and it did, and still does, give me great pleasure.  And being able to use my creative skills to tell the story of the aftermath of my mom’s suicide has allowed me to process it and heal in ways I never could have imagined.

An extra benefit of the work I’ve been doing in the suicide world is meeting others who have found multitudes of creative ways to tell their stories and work through their own grief.  Recently I was introduced to Stan Zimmerman, a comedy writer who has also written a play, right before I go, based around real suicide notes.  It’s a fascinating and important project which has gotten nationwide attention and been performed by such notables as Ellen Burstyn, Judith Light and Vanessa Williams.

Stan’s long career covers multiple mediums (TV, film and theatre).  He’s been nominated for two WGA Awards for Best Comedy Episodic Writing on the classic TV series – “The Golden Girls” and “Roseanne”.  Stan’s also written and produced on “Gilmore Girls”, co-created the Lifetime sitcom, “Rita Rocks” and wrote on both “Brady Bunch” movies. Stan has a BFA-Drama from NYU/Circle-in-the-Square and has directed such LA productions as the LatinX “The Diary of Anne Frank”, “Entertaining Mr. Sloane”, “A Tuna Christmas”, “Gemini”. and his original plays — “Meet & Greet”, “Knife to the Heart” and “Have a Good One”. Stan will be directing Colin Mochrie (“Whose Line…”) in “Hyprov”, a new show combining improv and hypnotism, playing for a limited run at the Daryl Roth Theatre in NYC starting Aug. 12. TRWplays recently published and licensed three of Stan’s work — “Yes, Virginia”, “Silver Foxes” and his suicide notes play, “right before I go.”