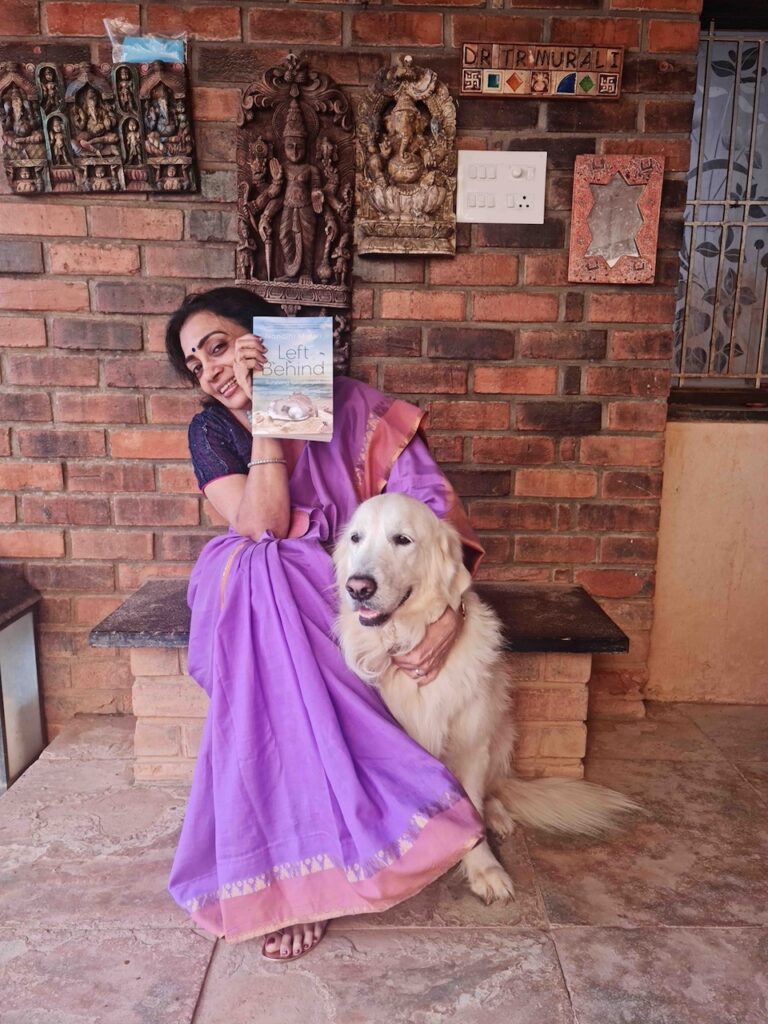 In honor of May being Mental Health Awareness Month, I am posting another installment of  my YouTube series Talking About Suicide Loss With… The backstory to how I met this interviewee shows how the things we struggle with most are the things that can truly connect us.

Last month, my good friend and mindful meditation teacher, Brian Shiers, who has been of great support in all my endeavors since I meant him 20 years ago, sent me a posting for Awakin Call, a free ‘weekly global series of deep conversations with inspiring change makers’ on Zoom.  The speaker he thought I’d be interested in was Dr. Nandini Murali, a South Indian journalist and author, who had just released a book, Left Behind, published by Westland Publishers, about facing down the stigma, shame and secrecy around losing her husband to suicide in 2017, rebuilding her life, and the importance of opening the conversation around this taboo topic.

Obviously her story and her push to get people talking piqued my interest, given my continued work on The Silent Goldens documentary, but her name also rang a bell.  Last September after I gave an interview to an Egyptian website, Masarawy,  for Suicide Prevention and Awareness Month, the reporter asked if I knew anyone internationally that could also participate.  I didn’t, but contacted author Carla Fine, who I befriended a number of years ago at a conference, who supplied the contact information for – you guessed it – Nandini Murali.

Carla’s book, No Time To Say Goodbye, was written in 1999 when she was unable to find any books to help with surviving the loss to suicide of her husband.  Nandini faced the same problem finding resourced in India, but found Carla’s book and reached out to her, forging a quick and close friendship.

Her talk was very powerful and her ability to process the tragedy and move through it very purposefully and thoughtfully was incredibly moving for me, especially since it’s only been four years since her loss. She also spoke about wanting to collaborate with other loss survivors in spreading our mutual message, so I immediately wrote to introduce myself and let Carla know of the coincidence.

A few days later the three of us were on a Zoom call, and a few days after that Nandini and I re-Zoomed to do her interview, which I am proud to post for Mental Health Awareness Month.  Carla’s interview was one of my first episodes.

As I read Nandini’s book I find myself nodding along to her pain, but so impressed with her resilience.  A must read for anyone dealing with suicide grief and a great read for those mired in any type of grief.

Driving a 2021 model new car after spending two decades in my old one has been a trip in itself.  Luckily I’d been at the wheel of rentals over the years and a passenger in autos more modern than mine so the transition wasn’t exactly like in the movies where someone wakes up after being frozen in time and the world has changed, but there is a lot to get used to.

Over the years my dearly departed Rav4 had developed some quirks that I got completely used to.  All the audio connections except for radio quit working probably over 5 years ago.  The lighter plug burned out even before the music did, so charging in the car was not an option and had to ration my GPS use if going far.  Sometime last year the spring in the back passenger door close/locking mechanism suddenly fell out.  I bought a ratchet strap to keep it closed until I could get it fixed then, upon learning it would cost at least $200 if they could find a used part, I chose to stay with the ratchet strap.

When I started driving the new car, it honestly took me a few days to remember I could once again open the back doors to stash stuff in the back seat.  Being able to listen to my choice of music off my phone is a fabulous thing, as is the coordination that app does with my map app so I know where I’m going while I’m singing. And since I plug it right into the USB port of my dashboard (!!!), I don’t worry about running out of battery and can go right to playing my games once I’m at my destination.

I’m learning about the features slowly so as not to overwhelm myself, but have the basics down, so I took it on the road to stretch its wheels and get me to my pre-planned Tiny House getaway. 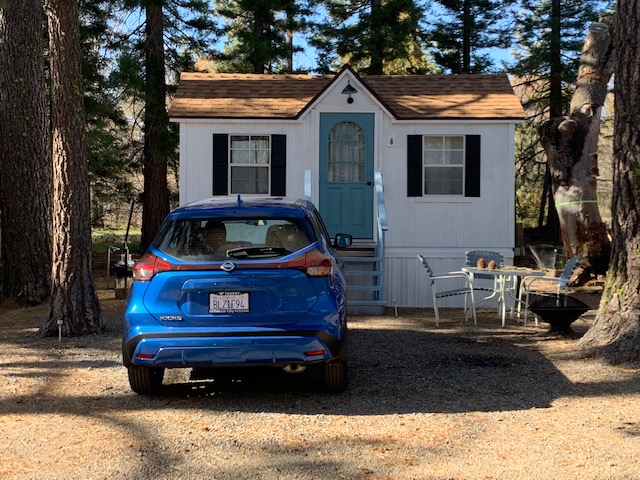 Sometime over the last few years, I’ve formed a dream of living in a tiny house.  One thought is that a good friend will buy a house with a huge plot of land that they will let me build it on, or to have a plot of land and develop a small community of tiny houses.  During the pandemic, when my pet and housesitting business evaporated and I was looking to leave the situation I was stuck in when lockdown was called, I looked for furnished apartments, guest houses, and tiny houses for rent.  Lo and behold, I discovered tinyhouseblock.com – a community of tiny houses in a resort area of the mountains east of San Diego.   They have long and short term rentals or you can build on their land by renting a space, similar to an RV park, so I figured I’d do a test run and make sure I actually do like the idea before I dream up my whole future in one. 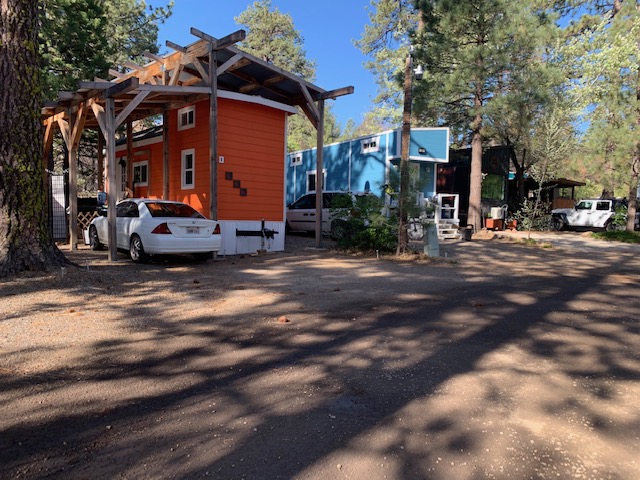 I do like it.  I like it a lot. My entire adulthood, no matter how much space I’ve had to myself in small apartments or large homes, I always pick one spot on a couch or bed (whatever is facing the tv) and use that as my spot for as long as I’m there, so I’m good with a small space.  Even though the one I’m in is smaller than a hotel room, there is something about it being a freestanding building, with a bit of space between your neighbors.  Long-term residents decorate around their space and its a homey feel.  Pets are allowed and there are lots of very well behaved dogs.  Inside there is storage under the bed, and lots of drawers in the kitchen area so I easily put everything away.  Each house is different in layout and the rentals have themed decor.

The people that work here, Nick and Natalie, have been incredibly nice and have given me a lot of information about the Tiny House Block itself, as well as, tiny houses in general.  And they gave me a gift certificate to the restaurant that is on the property where I had the most delicious French onion soup I’ve ever had – and I’ve had a lot.

Over all the place feels like summer camp, both for the fact that it’s out in a nature area and how nice and interesting people can be.  I’ve had at least one fairly long conversation a day with various people and all say how like-minded people (like to travel, like nature, minimalist, interested in others) gravitate to this community.

Best of all, alone in the woods, I am getting stuff done on my project, and my story will be featured in the May Tiny House Block newsletter!