A Birthday Gift for Mom 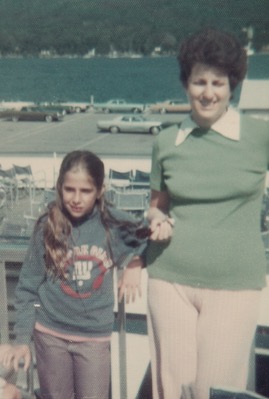 This Monday, March 15, was my mother’s birthday.  Unlike January 15, the anniversary of her death, it’s a milestone date I’ve never been sure what to do with. Rituals are typically built up around death dates.  In Judaism, there is a prayer and special candle to light.  Over the years I’ve spent the day looking at old letters from her, going through photos, writing updates about my life in letters that will never be sent to her, or listening to the recording of her memorial service.  It’s a day where melancholy feels natural.

Birthdays, however, have that celebratory edge.  I know people often commemorate the lives well-lived of loved ones who have passed, using those dates to share happy memories.  But because my mother died by suicide, her traumatic, unexpected and premature passing tends to overwhelm anything else about her life,  and knowing how the story ends, the idea of celebrating always comes with a cloud over it.

Since I began work on The Silent Goldens,  my ultimate tribute to her life and legacy in opening up conversations fro help others touched by suicide, I have learned that the suicide will always be part of her story, but before that her life was well-lived and deserves to be celebrated.  By expanding my idea of what “celebrating” is, I realized that anything I do related to my mission of awareness of loss survivor issues celebrates her.  It doesn’t have to be balloons and a cake.

For this year’s birthday, I have posted the first Talking About Suicide Loss With episode of 2021 on YouTube featuring Dorothy Goulah-Pabst, who lost her mother to suicide in 1972.

I first met Dorothy when I was her interview subject for her Masters thesis, Suicide Loss Survivors: Navigating Social Stigma, and I was thrilled when she agreed to participate in my project.  Dorothy’s experience really shows how awful the stigma around suicide can be for the survivors and how speaking after decades of silence can be completely life changing.

Along with earning her MA in Sociology from Cal State Northridge in December 2020, Dorothy has become a facilitator with the Los Angeles Area SOLACE suicide loss survivors drop-in support group.  Info at solace4sas@gmail.com.

Check out her segment here.