I Read a Book and Am Inspired 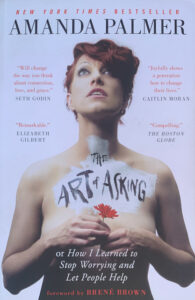 I didn’t know what to expect when a friend (thank you Rob Barnett!)  gifted me The Art of Asking by Amanda Palmer.  I had reached out to him for help in getting The Silent Goldens documentary across the finish line as I am working to raise the final $50,000 to finish it off.  The difficulty with this part of has been made even harder by my issues with asking for anything, but especially for money.

The book is an outgrowth of her TED talk on the subject that has been seen over 10 million times.  Her talk came about from her success in being the first musician to reach $1 million dollars on Kickstarter for an independent album.

I found the book inspiring on so many levels – her authenticity, vulnerability, resilience, fearlessness, persistence and her ability to find the good (or at least the lesson) in any situation.  Her story is about the relationships she spent years building with her fans by staying connected and creating a community online and in person and in how creating this, gifts show up in many forms. She illustrates how it’s easy for those who love you to give, whether it’s a monetary gift or loan, a couch to crash on, or a flower given as a thank you.

Her experiences and writings also show how gifts aren’t just about one person giving and one person taking.  There is a trade involved.  Her fans gave her the money to make an album they could listen to, attend shows where she performs and to allow her to exist and be the person who gives these things.  Sometimes, she points out, just allowing someone to give to you can be a gift in itself, allowing the other person to feel helpful.

I am a big fan of being a helper and find purpose and satisfaction when I know I have been useful, whether it’s a favor, a paid opportunity or even just lending an ear.  As long as what I’ve done fulfills a need, I’m all good.  I am also big fan of the trade.  In my current life has a roving dog sitter, I have had numerous times where I have traded dog care, cleaning or (when I can) money to have a place to rest my head when I’m in-between jobs.  Just last night I traded a ride to the airport for a place to crash for an evening. A win-win, I like to say.

What has been most difficult for me in the asking for help on The Silent Goldens documentary is that the story is personal so in a sense I feel like I’m asking for help for myself.  But while it is my family’s experience, the intent is to share it for the benefit of many.  To help those affected by suicide and teach others about the suicide loss experience so that they, in turn, can be part of the conversation and have an understanding that helps breakdown the stigma and shame surrounding it.

The ability to tell my story is what I have to give to the world and those that have heard it at conferences, my college reunion, and other venues I’ve spoken at have told me it is meaningful.  I’ve tried to spread the word through podcast appearances, written articles and interviews I’ve given.  The help I’ve asked for (and continue to need) are the funds and resources to get my film done, and many people I know, along with some I’ve never met have stepped up, warming my heart each time.  The trade I offer (along with the knowledge that the help is specific and  tangible) are memorial credits in the film and on my website honoring their loved ones lost to suicide.

I have a lot more work to do to achieve my goal and build my community and I hope by putting myself and my “ask” out there more consistently will be the key.  Amanda has proven that people are fundamentally generous when they care about someone or something and, given the success politicians find in fundraising, I know it can be done.

So I humbly ask, in the spirit of the book and the perspective it gave me, if you are able to give and support suicide awareness in the form of my film, please visit thesilentgoldens.com and make a tax deductible donation and honor those lost to suicide.  And please post and share about the project so others may join the cause.

And read the book!  It’s fascinating.

Thank you for your consideration!