When In Need, I Had A Friend Indeed

The last few weeks have been a whirlwind of emotions and life lessons.  When terrible things happen, it often takes time to see the silver lining that often comes out of it.  This time the turnaround was very quick. The good doesn’t make us wish the terrible thing didn’t happen, but it opens up our lives in new ways.  This is my story.

On April 2, I was preparing to write a blog about all the change in the air with Spring renewal, the light-at-the-end-of-the-COVID-tunnel (I’m vaccinated!), and significant life shifts for some of my closest friends, including one moving away from the house that has been my second home and refuge for the last eight years. It’s all good change, but it made me look at that chunk of my life and all that had transpired, so saying goodbye to the space was bittersweet.

Since professional movers were involved, my only job was to pick up their dog and bring her to my house while the movers did their thing.  Later in the day while the dog was napping, I went out to do a couple of errands and radical change hit me – literally.  A man chose to run a red light as I was turning left, and my beloved Rav4 was mortally wounded in the ensuing crash.  No person was hurt, but my 20-year-old, 207,078 mile Mystic Teal Mica baby that I have loved since I first drove it off the lot brand new on July 3, 2000, that took me and my dog Riggs on so many adventures, and that became part of my identity was essentially gone. 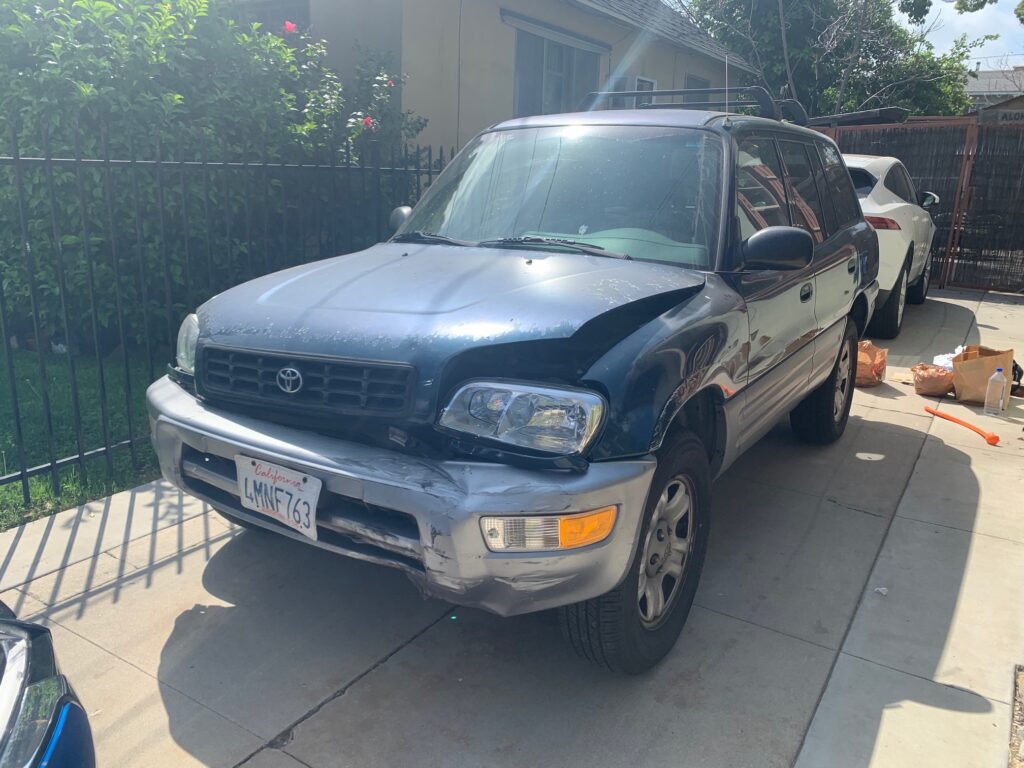 It was my perfect car for many reasons and in my perfect world, I would have kept it forever despite it’s age, miles, and knowing (but not admitting) that driving long distances in it wasn’t realistic anymore. Still, my first instinct was to get an appraisal to see about fixing it, which was about 7x what the Blue Book value said it was worth before the crash.  My mind was numb as I tried digesting that number while still processing the magnitude of it all. As easy-going as I like to believe I am, I was not ready for this, I did not want this, and my emotional attachment to my faithful companion had put me in a state of grief.

I didn’t tell my friend what happened until she was ready to come get the dog since she was in her own version of hell, but when she arrived less than 30 minutes after we spoke, she did something that opened up my eyes and my future. This essay is a tribute to my friend and our long-lasting, ever-evolving friendship. In order to not completely embarrass her, I’m using the code name Brigid.  Brigid is a Celtic ‘Triple’ Goddess of healing and fertility, passion and poetry, and of life and death.  All these attributes reflect her impact on my life.

We met in 1990  at the taping of Sinead O’Connor and The Church for MTV’s Unplugged during its first season of production.  We started talking and never stopped. We both worked at MTV and moved into our dream jobs down the hall from each other a week apart.  We both lived in the East Village.  It was instant connection and we’ve helped each other through the ups and downs of life, work, love and heartbreak.  That kind of friend.

Brigid even helped me hobble around NYC when I broke my ankle skydiving and co-opted a colleague to decorate my cast.  And, coincidentally (?), it was touring her groovy new house in LA last month when I most recently sprained my ankle.  And she and her husband took me to the emergency room.  That kind of friend.

Our paths diverged when I left MTV after a few years and she stayed, which began a career that has seen her rise to great heights in the industry, using her natural creativity and talents, along with being an incredibly hard and devoted worker.   I’ve long admired her career and know now that along with all those attributes, it is her diplomatic way with people and true ability to see two sides to every issue that separates her from the pack, and is a skill set I lack (or that devolved over my time in production).  I am constantly in awe of her abilities in this area, especially knowing the craziness she has to deal with.

As we each threw our lives into our work and developed other relationships, we didn’t hang out as much, but I always ran to her with my deepest, darkest problems and was always there to deal with whatever she wanted to share with me. When I moved to LA, Brigid remained in NY, and we didn’t talk regularly, but no matter how much time  passed, the conversations just picked up as if we’d seen each other an hour ago.

When she and her family finally came west 9 years ago, so did the friendship.  Her executive position at a network kept her busy, but my freelance lifestyle allowed me the time to pick up her daughter from school for a few years and stick around til dad got home from his teaching job.  I saw more of them than her, but she was very generous in treating me like part of the family for fun outings or occasions, and I was happy to be of service.  I haven’t been needed in a couple of years since the daughter hit high school and then the pandemic halted the rest of normal life, but we do see each other on Zoom every once in a while, and more recently at some outdoor get-togethers with a small friend bubble.

Brigid was well aware of my deep attachment to my car and listened patiently while I explained that my early thinking was wrapping around the cost to fix it or looking for another used 2000 Rav4 with less mileage.  Then, to my complete surprise, she flat out said she wanted to buy me a car – or fix mine – whatever I decided.  I was actually totally speechless – a confused, disbelieving, not understanding silence.  And I started crying.  It was such a generous, unbelievably kind offer, and difficult to comprehend that someone actually just made it to me, solving a problem I was still trying to pretend didn’t really happen.

Aside from my denial about the Rav needing to go, asking for help and accepting help, especially when it comes to finances, is an extremely complex and loaded problem for me rooted deep in self-esteem issues.  I knew in the worst case scenario I could turn to Brigid for a loan, but never would have dreamed of her – or anyone – simply giving me such a life-changing gift.

She explained that this was a tangible way she could show gratitude for the help I’d given her and her family since thy moved to LA, something I felt she’s always been clear about.  Apparently my giving my time when needed gave her the peace-of-mind that allowed her to be fully invested in her job, which, in turn, has given her the resources to be able to help me in this way.  This explanation helped me understand, and believe, the purity of her offer,  and she is literally the only friend I would even think about accepting this significant a gift from because of how we’ve backed each other up in ways big and small.

Brigid’s other words that stuck out to me were that she wanted to see me in something “safe” and it was “for what comes next.”  After she left, I began to realize that I was trapped from my wanderlust ways by my car.  It had no significant problems, but any thoughts of going too far outside LA involved wondering what I’d do about transportation.  She was offering me back both my daily freedom to get around and the ability to hit the bigger picture road ahead.  It was an offer I couldn’t refuse.

We made a plan to go to CarMax just to see what was out there.  Since I didn’t ever want to get rid of the Rav, I hadn’t paid attention to cars in years and my interests run to something cute and easy to drive vs. caring about all the bells and whistles, so the idea of test driving a bunch of cars on various lots wasn’t very exciting.

When I called my dad to let him know what happen 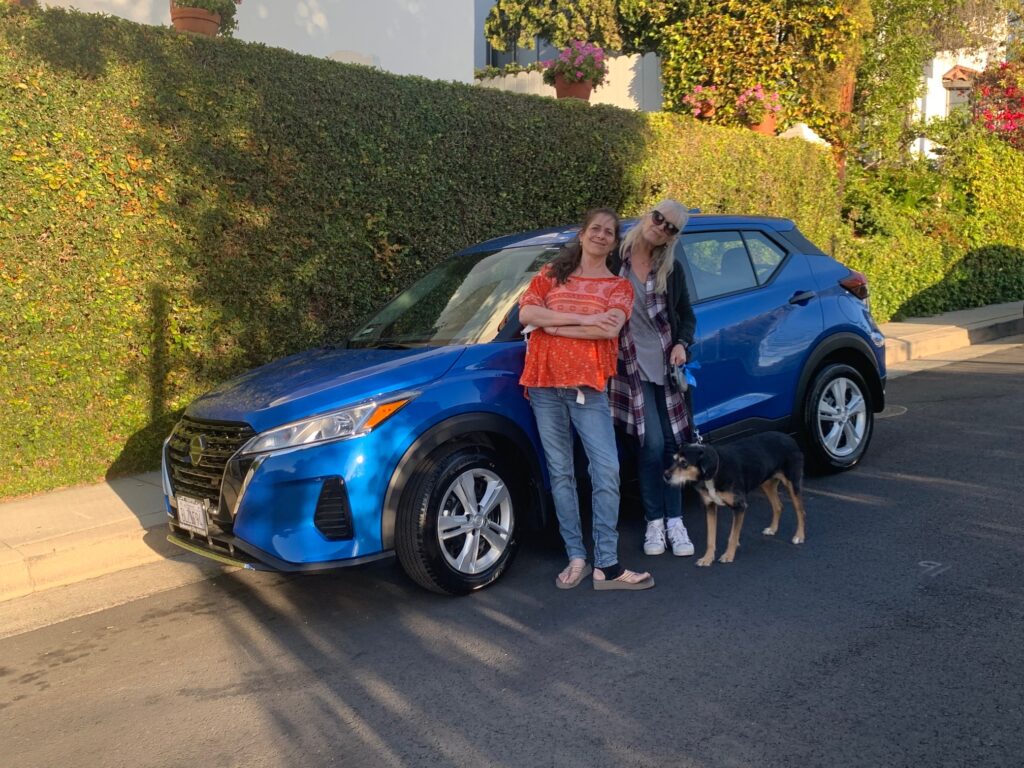 ed to the Rav, about Brigid’s offer, and get advice on buying a used car, I was stunned again when he said that he’d been concerned about me in my car for a few years and was so touched by Brigid’s generosity, that he and my step-mother instantly said that they would be happy to add on to whatever she was planning on helping with to put me in a new vehicle that I could keep for another 20 years!  And I felt like I won the lottery!  Not just in getting a new Nissan Kicks (which I do love a lot!), but in having such generous, caring people in my life.  I really didn’t know people were so worried about me in the Rav.

I’ve heard it can be a kindness to let others do for you.  It’s not the way I usually roll and I can’t say I’m completely comfortable with such a massive, incredible gift from either my friend or my parents, but Brigid opened my eyes a little better to the impact I make in others’ lives through my friendship, and that being open to receiving from those who want to give back to me is part of that.

I am still stunned at the swift turn of events and how this story played out.  I am forever grateful to Brigid, my father, and step-mother for your help and this awesome, wonderful, cute, fun car!  Long may we ride together!!!