To Know Or Not To Know

I’m not sure where my parent’s got the painting that sat above the couch in our living room in Texas, but saying that was painted on it always resonated with me and –those who know me know my love of quoting quotes- quoted and continue to quote often read 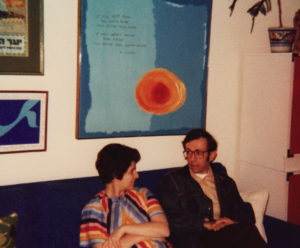 you think you know.

you think you don’t know.

I believe these words apply to everything we do – every action we take and decision we make is based on some sort of knowledge. It might be very basic from having information (or not) about what time the tv show you want to watch is on to having the training to practice brain surgery or rocket science.

The first paragraph explains what was going on in my head the last 30 years due to the family silence about my mom’s suicide. I made up stories about people and created motives for them based on what I did know, which was very little. I assumed many things, formed judgments, and chose evidence from their further actions to confirm my narrative.   I also assigned them opinions about me and reacted to them accordingly.

Once I began asking my family members the questions at the core of my stories, the narrative changed dramatically. I got the facts – the knowledge, and the entire picture and magnitude of what happened came more into focus.

My interpretation now of the second paragraph speaks to the “should have” paragraph in my story. My parents kept a lot of information from me and my sister once my mother was diagnosed with Non-Hodgkins Lymphoma in 1984. I was a freshman and my sister was a sophomore at Carleton College in Northfield, MN and they led us to believe everything would be fine, her chemo was working, and they were determined not to distract us from our studies. I think we were determined to distract ourselves from her illness.

Both my parents worked at the University of Texas Medical Branch, my father as a pediatric neurologist, and my mother as a social worker. Throughout our lives my sister and I learned a lot about a wide variety of diseases, conditions, syndromes, and the various departments of the hospital while sitting at the dinner table. I’d seen those ‘70s TV movies where a kid gets a nosebleed then dies of leukemia. Back then cancer often equaled death. I didn’t think about it, but I’m sure it was somewhere in the back of my head. I didn’t ask, but if I decided to add up all the little things, I was savvy enough to “know” it wasn’t going to end well and I was in no way prepared.

I always believed those paragraphs represented the two ways of approaching knowledge. But then came my mom’s suicide and that never even crossed my mind – I neither knew, suspected, had an inkling, or otherwise. Suicide was a plot point in books on movies like Ordinary People, which I saw with my parents. We didn’t discuss suicide after the film, though. It wasn’t “real.” Until it was.

What you can’t know

You won’t know til you know.