The Language of Grief – A Book

Stacy Parker and Ruth showing off their living quarters at Kibbutz Yahel near Eilat, Israel. 1986. No idea who or what is happening on the lawn – or with our hair.

In January 1986, a year after my mother died, I enrolled in a semester abroad program in Israel on the pretense of sparking my interest in returning to college but in reality to escape home when my father remarried.  One of the people I became close to on the trip was Stacy Parker but we did not stay in touch for long after as she lived in California and I was getting ready to move to NYC both in the midst of launching our “real” lives.

She knew my mom had died, but, as she has now told me, I did not speak about it at all and she didn’t feel able to ask because of her own aversion to  the subject at that age.  I knew through the grapevine that she had lost her first-born daughter, Alyssa, in 1997 at age 2, but only when we became Facebook friends years later did I learn how involved she was with organizations dealing with palliative care and hospice for children because of her experience. I also realized how close she lived to me and when I was ready to face my own grief and get involved with suicide related groups, I reached out to her to better understand the nature of volunteering in the grief world.

Our friendship resumed over lunch as if no time had passed as we shared our stories of loss, the need to talk about it, and the desire to use our pain to help others suffering. Even though suicide wasn’t a common factor in our losses, the traumatic nature of them was. While our discussions often focus on grief and death, it is never in a morbid way.  It’s been normal for Stacy for years and her comfort talking about it helped mine grow.

Spending time at her home and with her husband and teenage son and daughter impressed on me how someone who has passed can be kept ‘alive’ in a way, as there are pictures of Alyssa around and they honor her during special occasions.  She is not some memory too sad and upsetting to be discussed nor does her presence overshadow their present life.

Stacy has known about my idea for The Silent Goldens documentary since it’s very early days and has been supportive and helpful in multiple ways and I was happy to return the favor when she asked for some input on her latest project, a new book called Grief As a Second Language, which is now on Amazon.  She even uses my story as an example in one of the chapters – but you’ll have to read it to find out which one!

One goal for my website and this blog is to promote other people’s projects that are in line with my mission to get people talking and sharing.  So let this post serve as a  plug for her book.  Here is the review I posted on Amazon about it : 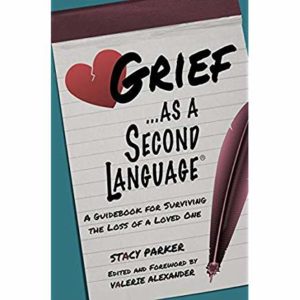 Having experienced traumatic grief after my mother’s suicide, I found this book covered the wide range of feelings and experiences I faced in the aftermath.  With the author so openly sharing her story of losing her daughter and how she got through the worst of it, the book reads like a letter from a friend who understands, not an expert listing generic advice about dealing with the “stages” of grief.   The details of everyone’s story are different but loss brings on many common emotions and situations that only others who have experienced can truly understand.  Stacy simply shares what she learned and did to give others the space to come up with a way to start healing that works for them.  I’d recommend this book for anyone with a recent loss or anyone who wants to prepare for the inevitable sadness we all must face.

I’m excited to go to her book party on Jan 8 and get my signed copy!!!

Check it out on Amazon!