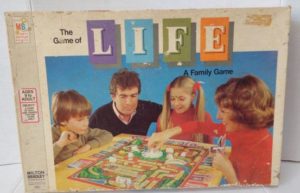 The incredibly limited playlists on LA radio have that song  “I’m a loser baby, so why don’t you kill me.”  It goes round and round in my head.  One time I heard it as I was pulling up to a suicide prevention event, so that was weird.

But today I want to talk about the word “loser.”  I understand the concept of competition and when there can only be one winner, there will be losers.  It’s the word for “not winners.”  But they are losers of that particular competition.  The label isn’t supposed to make a statement about your life.   I know about losing.  Especially in sports.  I have never won a trophy.  Admittedly I rarely participated, primarily because I didn’t want to be a loser.

.Because the word has been co-opted as an insult, it has taken on this broad meaning that implies worthlessness as a human being.  It’s thrown around against people we simply don’t like, people who don’t live the way we do, people who struggle with problems we don’t understand, and so on.   Many “winners” have been called losers.  Many go on to lose.

What is the competition?  What are we winning?  How are we losing?  Randomly assessing someone to be a loser says nothing about that person but clearly exposes our judgmental tendencies.

The cultural definition of success isn’t something the whole world is vying for and let’s be grateful for that.  Different interests, different desires, different opinions make this world go round and allow us to have shopkeepers, doctors, teachers, engineers, trash collectors, movie starts – if all these people only focused on the very narrow vision of “winning” this game, we’d be hurting for the services and communities that make our society thrive.

There is the board game Life.  I’ve played it – recently in fact.  I enjoy it but I used to get freaked out if I lost thinking it was an omen about my life.  But I’ve since learned that life has many paths, many challenges, and many, many interruptions.

Many might call me a loser right now.  I don’t have all the accoutrements of an adult life.  I own a 17 year old car (18 on July 3!), I live in other people’s homes doing dog and house sitting full time.  I was playing the game of tv producer and it was making me crazy.  It turned into a game I didn’t want to be playing so had a mid-life crisis breakdown and am still in the metamorphosis stage.  My stages seem to take longer than other peoples’ but I know I eventually get there.

So am I loser?  Maybe, but I say there is no game.  Life is not something to win or lose.  There is nothing tangible, no definitive mark, no mountain peak to reach –  just infinite mini-games you can choose and challenges you can set for yourself to make things interesting.   Everything becomes a lot more fun when you aren’t striving for an invisible, unattainable goal to avoid a label that makes no sense in the first place.