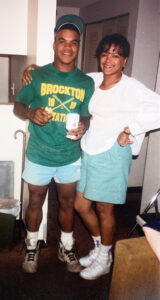 The Saturday before Thanksgiving was designated International Survivors of Suicide Loss Day in 1999 when Congress passed a resolution proposed by Senator Harry Reid of Nevada, whose father died by suicide. At observances around the world, people share their stories of loss, healing and hope in a safe supportive space with others who truly understand the specific issues and pain those left behind endure.

When I began dealing with my mother’s death 30 years after it happened, the first event I attended held by American Foundation for Suicide Prevention in Santa Monica was incredibly meaningful.  It showed how you could honor the life of people who have passed and not focus solely on the cause of death. I could see how powerful the experience was for those among the hundred or so that were there who’d had a recent loss and hadn’t yet found a way to speak about it.

Hearing others stories reflected in mine in these types of situations convinced me to begin speaking publicly about my loss six years ago.  In doing so, I have been able to process the grief for bothmy mother’s loss and wondering how different life might have been without closing myself off from my emotions for decades.  Most importantly, I’ve found purpose in helping others in their grief and encouraging conversations.

Just as my story of silence after suicide is a common one in the loss survivor community, so is the one of the loss pushing survivors to “jump in” to the world of awareness,  prevention, and healing. This month, in honor of Survivors Day, and because I am thankful people like this woman exist and do what they do, I am featuring Dr. Donna Barnes in a new episode of Talking About Suicide Loss With.  After losing her 20-year-old son, Donna earned a Masters Degree in sociology, focusing on the social environmental factors that contribute to suicidal impulses, and has served the loss survivor community in many impressive and important ways.  Here are the highlights:

A certified Master Trainer for suicide prevention and intervention, Dr. Barnes trains faculty, staff and students as well as the community on how to recognize the signs of someone who is in a suicidal crisis. She is also the co-founder of the National Organization for People of Color against Suicide (NOPCAS) after losing her son to suicide while he was in college. Dr. Barnes teaches suicide risk management for the College of Medicine’s Department of Psychiatry at Howard University and has published peered reviewed articles and chapters as well as conducting presentations on the topic across the country. She is the author of the Truth About Suicide published by DWJ books in New York as part of the “truth about series…” for middle school and high school students.  She has developed a campus-wide prevention program at Howard University; and through NOPCAS conducted support groups for friends and family members of suicide loss survivors.

Barnes has been featured on several radio shows and media outlets including NPR, CNN, The Huffington Post and The Washington Post.  She currently serves on the CDC’s Board of Scientific Counselors for the National Center for Injury Prevention and Control.