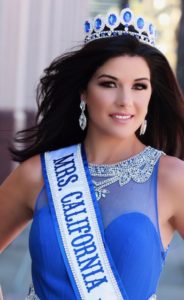 When I started volunteering with the Greater LA chapter of the American Foundation of Suicide Prevention, I found an incredibly diverse group of people from all walks of life, occupations, and backgrounds.  Like with survivors everywhere, the details of our stories varied drastically, but the distinct pain and problems suicide loss brings united us. I told the chapter director I wanted to jump right in and do any and everything to help.  She told me about another volunteer who said the same thing and was already doing it – Dawnel DeRubeis.

When I met her, Dawnel had just been crowned Mrs. Hollywood 2016 with a platform of mental health and suicide prevention stemming from her own struggles and attempt, as well as the loss of her grandmother to suicide.  She was the emcee of the first AFSP Out of the Darkness community walk when I was on the chapter board so we chit chatted and became friendly. When I heard her explain what brought her to volunteering for AFSP, my mouth feel open because her words were my words – from looking for volunteer to try and avoid falling into a depression to finding our life purpose and making it a mission.

Since then our friendship has grown and she has made a huge impact in the Santa Clarita area of LA, with her tireless work to bring educational programs to the community.  In Spring 2019 she chaired the first ever Out of the Darkness Campus Walk at the College of the Canyons there. Dawnel also fulfilled her pageant dream of winning Mrs. California 2017, allowing her a large stage for her mental health platform.

I aspire to be as effective as Dawnel in spreading the word and see her as an inspirational role model.  Dawnel DeRubeis is a beauty queen inside and out!  Check out her Talking About Suicide Loss With segment here.