May is  Mental Health Awareness Month and I’m so happy to have Dana Fuchs as the guest on this month’s Talking About Suicide Loss With segment for the occasion.  She is a powerful singer/songwriter who has added her voice to the conversation about suicide loss, sharing her story from the stage and her loss through her music.

Dana’s soulful voice was touted by Classic Rock magazine as “juke-joint dirty and illicit, evoking Joplin, Jagger and a cigarette bobbing in a glass of bourbon”.  She actually played Janis Joplin off-Broadway in Love Janis, and is often recognized from her role as Sadie in Julie Taymor’s 2007 Beatles-based film Across The Universe, singing “Helter Skelter” as one of her solos. The Dana Fuchs Band had become a top live act in the NYC blues scene when  her debut album was released in 2003.  Along with a very busy international touring schedule, Dana currently serves as an ambassador to the JED Foundation, a non-profit focused on suicide prevention and providing mental health resources for teens, in honor of her older sister who died by suicide. Her song “Songbirg (Fly Me To Sleep)” was written about that loss and is on her first album Lonely for a Lifetime. In 2018 Dana released Love Lives On, inspired by the music of Memphis, TN and recorded there.  All the info about Dana, her albums and tour dates can be found at danafuchs.com.

I conceived of the Talking About series because of all the amazing people like Dana I’ve been meeting who have also been affected by suicide loss, and the silence that follows it.  I’m constantly in awe of the very different and creative ways people develop to use their loss for the benefit of others, as I am about to do with The Silent Goldens documentary.  Their work has inspired me on my mission, giving me the confidence and motivation to keep pressing on, and I wanted to create a platform for those who have opened up to explain why it has been such an important part of their healing while gently encouraging others to speak.  My story of silence, sadly is not unusual and though the details of all our experiences are worlds apart, the pain and problems we face are sadly all too common.

Survivor support groups often talk about “being in a club nobody wants to belong to.”  I’m sure other groups use that expression too, as it applies to all situations (I think) that one would seek out a support group to deal with. The bonds forged through common experience are often due to horrible experiences. War, natural disasters, crime, loss and all kinds of events that change us deeply.  But bonds are also made through good times. “Families” are formed because of togetherness, common goals and interests.  Working in television production – or any project-based job – can easily produce that connection because you often give your life over to the project for periods of time,  you travel together, you find yourself in unique situations and dealing with personalities that only other people on the production can truly understand.

At the beginning of my television career in the early 90’s I was very lucky to work at MTV when it was still focused on music, was only on the cusp of getting a corporate vibe, and a lot of the stuff we were doing was still new – and generally very fun to be a part of. I am still good friends with many people from those days, and they are friends with others, and we all hear about each other and communicate online. Even if you don’t totally remember someone, there is still that automatic “in” for having worked in those halls at that time and always knowing at least a few people in common.

Kevin Mackall worked there.  We didn’t work together on anything or know each other well, but I remembered who he was when asked.  As we were starting to develop my film, he and The Silent Goldens director, Jon Bendis (my former MTV boss) reconnected and re-clicked as both are musicians and ended up in a band together.  Their catch-up conversations then led to the discovery that they were both working on projects for suicide awareness. 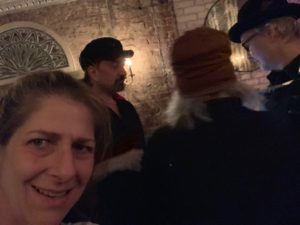 Kevin is now the Executive Creative Director of the JED Foundation and is married to Dana!  And that is how this very small world brought us together and now has bonded us in shared experience and purpose.  I communicated with Kevin via email a bit before I went to NYC a few months after the “suicide thing” came up and when we met in person, it was one of those conversations that was comfortable and natural, like we had known each other forever – even though we probably hadn’t ever had a full conversation because we “grew up” at MTV together.

I’ve been able to spend a little time with Dana in NY and got to see her perform in LA last year, but she’s a busy, busy lady and even though we have yet to have a good sit down story-swapping session, I’m thrilled she’s in my orbit.  Both she and Kevin have been incredibly supportive of all I am doing, which is a huge layer of validation that makes me very very happy!

Here is a link to her very compelling story

New interviews will be posted every month on the 15th.  Please subscribe to the page to keep up with the latest guests and help us grow our numbers!