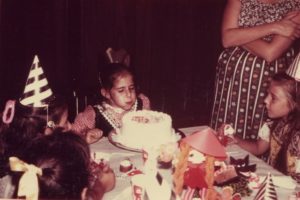 As my career in television production developed, I found myself pitching ideas to groups of executives, directing talent and crews in the field, and running staff meetings. Speaking to these groups wasn’t intimidating because I had a purpose in each circumstance. I had something to say.

When I began opening up about my mother’s suicide first to individuals as a volunteer for the American Foundation for Suicide Prevention then in a support group setting, I suddenly couldn’t stop talking. I actually had a lot to say. This time, though, speaking preceded finding the purpose

The idea for The Silent Goldens documentary was inspired by the conversations I was having and with strangers that I suddenly wanted to have with my own family – especially those who experienced a death when almost no resources were available and the subject was taboo.

Open discussion, active listening, and questioning my own narrative have transformed some of my thinking and validated other parts of it but, most importantly, continues to giving me new insights. Recently I was telling my story to a group of volunteers and I heard myself say, “I was living a lie. I wouldn’t tell anyone the biggest thing in my life.”

Many who know me will be shocked not only to learn that my mother’s “cancer related” death was actually a suicide, and to see how the cloak of privacy I wore for all those years has been shed. Revealing that lie allowed me to naturally stop “protecting” other things in my life that I didn’t want people to know, specifically any failures or situations that showed me to be not perfect. Now I see how my flaws and failures are a big part of the story and led me to this point in time.

Over the last year I’ve been speaking publically to groups at a variety of educational events and fundraisers, and am jumping at any chance I get to tell my story, bring awareness, and inspire people to start their own conversations no matter what the issue. Once I realized what I had to say, saying it was easy.

The trifecta effect of being comfortable on-camera, having the professional skills and experience to produce a film, and pursuing my story not just for myself but with a broader goal has given me clear purpose, direction, and motivation to bring this project to fruition to let other long-term suicide survivors be recognized, heard, and helped.

Along with my personal blogs, updates about production, and important news about suicide and mental health issues will be posted here. I’m also offering to have guest blogs about these subjects or personal stories of survival. Just reach out to me at thesilentgoldens@gmail.com.

Thanks for your support!