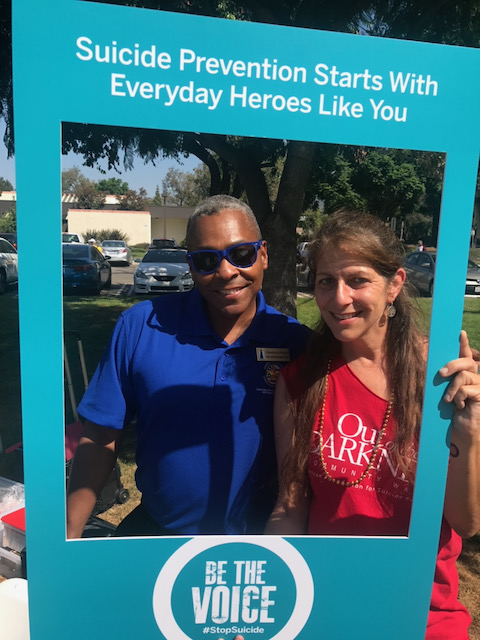 September is a big month in my life.  Primarily, it’s because I was born in September.  Then I always started school in September. And the Jewish High Holidays are typically in September. So it’s an annual sense of renewal, fresh starts and resetting goals.

It wasn’t until I was 50 that I learned it was Suicide Prevention and Awareness Month.  Suicide had been a part of my life since my mother killed herself when I was 19, but it was a part locked deep down inside me.  Everything changed when I attended my first suicide prevention walk with the American Foundation of Suicide Prevention in Los Angeles as a volunteer and immediately realized I found my people.  I was able to talk about my mom freely – no explanations needed.  The fact that everyone there had lost someone to suicide was new to me – it never occurred to me to look for other people but here I was in that “club no one wants to belong to” and there were so so many.

As a club member who is committed to speaking out about suicide loss and its ramifications on those left behind, I plan to be very active this month in putting forth information to help open and normalize conversations.

• Two new clips from the film will premiere.  The first on Friday, Sept 10, which is Suicide Prevention Day and then on Tuesday, September 21, which is my birthday.

• I’ve had two guest spots on Wife of the Party podcast hosted by LeeAnn Kreischer, wife of comedian Bert Kreischer, to discuss my film and suicide loss posting next Thursday, Sept 9.

• Four new Talking About Suicide Loss With… segments for my YouTube series. Guests are actors and crew from A Light in Dark Places, a play series about suicide and hope at the Stella Adler theater in LA.  Will be posted weekly on Sundays.

If you are in crisis, are with someone in crisis or are concerned about someone here are the numbers you should know

911       If someone is actively suicidal and has access to lethal means.

Let’s take care of ourselves and each other!