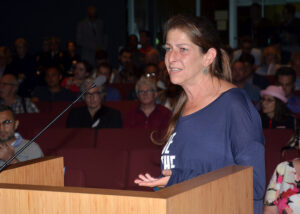 On Saturday, September 26th, I am slated to be the Lived Experience/Inspiration speaker at USC Verdugo Hills Hospital’s 6th Annual Suicide Prevention and Awareness Conference.  In the past it has been attended by over 250 health care professionals and community members, but this year it will be virtual, so those numbers could rise – hint hint! You don’t have to come to California to watch me live!!!

It’s a very exciting opportunity to promote The Silent Goldens documentary, and I’ll be premiering clips from it as part of my talk about my mom’s suicide and the struggles I faced that led to the making of the film.

Luckily, I have already had some experience telling my story in public – most memorably at the Carleton Class of ’87 reunion a couple of years ago, when I finally told my classmates who I ran away from after my mother’s suicide what happened all those years ago.  I am incredibly nervous and feel a huge responsibility, but so far I’ve seemed to be able to overcome most of my fears of putting myself out there if it relates to spreading awareness about suicide loss.

As I begin to work on my talk and focus it for this audience, I again think about how many different topics this one story hits.

• How suicide affects a family

• How the stigma affects healing

• The side-effects of silence

• When a mother dies

• How to help a loss survivor.

It can be overwhelming.  Based on the inspiration slot, I think telling the story as it led to the making of the film is still the strongest angle.  And I’ve already proven I can talk endlessly about it and have an outline of the film, so I am feeling pretty confident about at least making a solid point.

This the first big public step on my my mission to get people talking and is exactly the type of thing I hope to use the film as a platform to be doing in the days, months and years to come.  It’s that simple. So please, put this event on your calendars and support me, the film and all who are working to stop the unbearable pain that leads to suicide and the unending pain that stays with those left behind.  It’s bad out there. I’ll post all the details as soon as they are confirmed and published.

See you on the web!