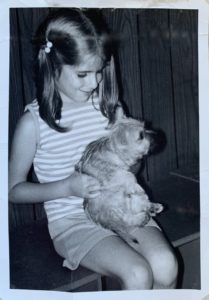 I am one of “those people” who connects with animals way more than with people.  Always have, always will. It started the summer I was 5 when Smokey, a Cairn Terrier (like Toto), became part of our family. I’m pretty sure it was at my sister Leah’s instance that we looked for a dog at all, but when Smokey arrived, I fell in love. Today, June 18, is his birthday. He lived until he was 18.

My attachment to him was strong and my anxiety over his well-being kicked in whenever I was sent away to camp or we took extended vacations in the summer and left him in the care of others. I don’t remember how much we helped with what I’m sure we promised when we got him, feeding, brushing, walking, etc, in the younger years, but I was happy to take on responsibility as we grew older.

I always felt Smokey and I had a special bond because he had a habit of grabbing things from my room like socks, little toys, a calculator once, and putting them under a specific chair in the living room.  Since he only took my stuff, I believe it was because he loved me most.  It’s possible I was the only one who left their things on the floor though. I know we all had a very special relationship with him.

When I filmed my conversation with my dad for The Silent Goldens, he told me when my mother was ill with cancer, Smokey would lay down in whatever room she was in, just quietly keeping an eye on her.  That information really touched me because I didn’t think of them being close like that.  Luckily he was still at a boarding place when she killed herself since my parents had just returned the night before from my grandfather’s funeral in Minneapolis. I would have been so sad if he had witnessed that or thinking of her saying goodbye to him.

My sister and I arrived home at night after we were told of her death and when I realized Smokey wasn’t there I asked my dad if we could get him in the morning, but since we were turning around in a day or two to go back to Minneapolis, he said it would be fair to the dog to get him out and them put him right back in.  I understood, but I really could have used his company and calm. I also kept thinking how he would come home not knowing what happened and never see mom again.

Once mom was buried, my sister and I returned to school and my dad went home and figured out a new life with Smokey by his side.  My dad and I were discussing how when things settled down in the months after we lost mom my sister continued to do well in school and my dad was moving forward with his relatively new job and new love, Connie, when I asked what I did and he responded “you attached to Smokey.”  A very revealing tidbit I thought.

I did indeed attach more than I had been because I didn’t have to share him and he essentially became “my dog.”  When I moved out of the house after my father got married I took Smokey.

When I moved to a studio apartment in NY with a roommate, I took Smokey. Unfortunately, by this point Smokey was quite old and my work schedule made it difficult to care for him properly, so I sent him home to live with my sister.  He lived for another year and my father sent me a plane ticket to come home when it was time to put him to sleep.  It was the first time I ever saw my father cry – even after all the stuff with my mom. 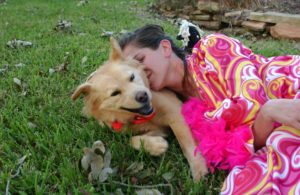 Both Smokey and Riggs truly saved my life at critical junctures, just by being by my side, and I am forever grateful to them both for that and for opening my heart to unconditional love.  I know I’m in for a lot of pain as my clientele grows older, but I also know now that it only hurts so much because you loved so much, so I’m going to cherish love in the now and keep my trust that the Rainbow Bridge* is real and my babies will be healthy, happy, and waiting for me when I come to get them. I believe.

*If you don’t know about it, it’s all explained here Rainbow Bridge Poem.