Since 1985, when I was 19 and I lost my mother to suicide, Mother’s Day – and the build up to it – has not been fun for me.  I actually haven’t (yet) polled other people who have lost their moms about their feelings around this holiday.

At some point or another we will all get the punch in the gut from months long build up to one of these holidays whether it’s Father’s Day, Grandparent’s Day, Sibling’s Day, Valentines Day, etc, as we all lose someone close to us at one point or another.

For years, just hearing about this holiday was just as painful as hitting other milestones such as mom’s birthday or the anniversary or her death, but now feels like a poke in the arm causing my eyes to roll and my brain to state to itself “my mom is dead.” I think the fact that mom’s death was suicide and (before I learned about suicide) also made Mother’s Day, specifically, hard because of the idea that there is “choice” involved.

My cousin, Abbie Fink, told me that, over the years, she has thought about the things I didn’t get to go to my mother to talk about.  It really struck me because, once I put my brain on that, I know how much help and guidance I was both lacking and in need of still.

Talking about my mom out loud and with my family has definitely brought her back to life in my memories but as I listen to what others say about her I am starting to truly miss her.  There are a number of things in my life right now that I know she would understand and help me form a plan to deal with rationally and maturely while standing my ground. I want to know what she would think of some of the choices I’ve made and the person I’ve become.  I want that person who is just there for me because I’m me.  I just want my mom. 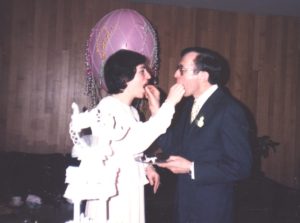 The additional conflict of this holiday is due to my father’s marriage a year after my mother’s death.  My sister, Leah, and I differ on the need to do something for Mother’s Day for my stepmom, Connie.   I respect and love that about my sister, it is a kind and inclusive gesture.  I am a little more black-and-white about the matter in that Connie is not my mother (and to her credit has rarely tried to act like one).  I actually discussed this with Connie and she is fine with it, having had her own stepmother after losing her mom when she was just a toddler.  And there is Stepmother’s Day on May 21 (the Sunday after mother’s day.) Now that I looked it up I guess I’ll have to do something!

I don’t hate the holiday, I think it’s wonderful to celebrate the special people in our lives and so many of my friends are moms who absolutely deserve to be honored and sincerely wish all those who are mothers a very Happy Mother’s Day, and that children everywhere relish the time they have together!