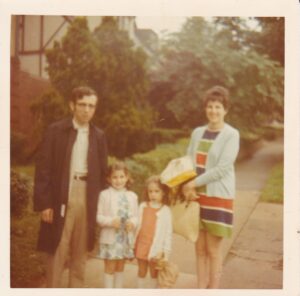 Many of life’s milestones bring up grief for those who have passed on.  After losing my mom at 19, the two that always hit hardest for me are the anniversary of her death, January 15, and her birthday on March 15.  The anniversary brings up memories of how much I miss her as a person and having a mother in my life.  Her birthday, however, makes me think about all that she has missed.

She died at age 47 – before my sister graduated college and became a nurse; before I found a career in television that I liked and was successful in, and before my dad retired and began traveling, something she’d always dreamed of doing.  There is no imagining what “back to normal” would have been like for her, our family, or me had she not killed herself or been able to beat the cancer she’d been fighting.

To me, she has never aged past 47, yet I still see her as the “adult,” even though I now am, and look, older than she got a chance to be. For yet-to-be-discovered psychological reasons,  I don’t keep track and rarely think about the age she’d be had she not died and have to do the math to first figure out when she was born by subtracting her age from date of death to get the year she was born then subtracting that from the current year.  And this year’s answer is 85!

When I figured that out, I said to myself “wow, I can’t picture that,” which immediately made me think, “I bet there’s an app for that.”  My next thought was “I’m not sure I want to see that.”  I decided to confer with my father and sister to see if they would be interested in seeing such a thing.  They were, so I gave it a try.

I’m sorry I did.  Not because it was freaky to see her looking old, but because it looked like someone scribbled lines over her face and added fat to the lower portion of her cheeks.  I did one with my dad’s face too, using a photo from around the time of her death and they appear to have used the same template.  I’m not going to name and shame because it was a quick experiment, but it is an image I will not keep or think about again.

Luckily, working on The Silent Goldens Documentary allows me to constantly go through family photos from when we were all young, healthy, and relatively happy.  Thanks Mom for giving me a good life and grateful for the good times we did have. Happy Birthday!