Filming Has Begun and Shoot 1 is Done! 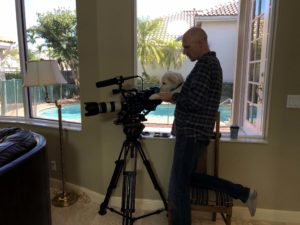 Chris teaching Cousin Henry how to make magic through the lens.

It has been just over a month since I completed the first official shoot for The Silent Goldens documentary. It, I’m happy to report, a resounding success!  My family was very open and pointed with their opinions and feelings, and I was pleasantly surprised that no one seemed nervous about the cameras.  The crew members were all wonderful, artistic, professional, and all the good things you’d want in a crew (shout out Danny, Dre, Karen,  and there was great rapport between themselves and with my family for two long and emotional days. 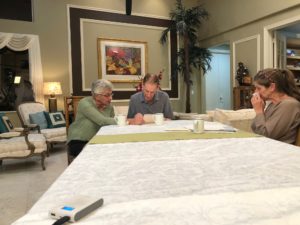 Mom’s brother and sister-in-law reading her final note for the first time.

For me, the experience was overwhelming in a variety of verygood ways.  On a personal level, I truly don’t have the words to express how thoroughly touched I was by my relatives coming together to have these intensely personal, raw, fully open conversations with me about such a horrible and traumatic subject as my mother’s suicide.  They didn’t have to.  They probably didn’t completely want to  – especially on camera – but they stepped up for me, because I asked and because they knew it would help me.  Every one of them also pitched in to make this shoot happen with travel, accommodations, and location, showing generosity of spirit in giving more than just their time and emotions. 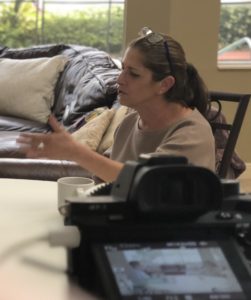 The family’s trust in me to tell our story in a documentary is huge. Yes, my career has been in TV production and, in one of the biggest surprises I discovered in the interviews was that my dad watched some episodes of My Big Redneck Weddingwhen I produced it, but they admittedly don’t have a full feel for all that I’ve done over the years. And if they do think about what I’ve done, it’s usually Redneck Weddings or Hogan Knows Best.

I admit it’s hard to explain as the job titles and tasks are ever evolving, dependent on the shows but this was the real deal and the first time any of them would see me “do my thing” and it was on my mind that things needed to run smoothly. Now I’ve exposed my inner most feelings and everything my “wacky” career has led to with my production coordinator, location producer, and interviewer skills full display to them and thanks to all involved – no major screw-ups!

The personal satisfaction of a job well done in front of an audience (and one that I felt would be judgmental on various levels) mixed with professional satisfaction of hitting this milestone and bringing to life what I’ve been talking about for almost 2 years and was a good feeling too big to completely process at that moment.

The idea for this film came to me in a flash while in a support group with suicide loss survivors within months of their loss.  I was emotional acknowledging how beautiful it was that they could all express their feelings so well so early on, explaining how in my family “silence was golden.”  I was being a smartass, but that’s who I am and that’s when inspiration struck. Already “in between jobs,” as we say in the freelance world, I decided to make this documentary my job. I’ve sacrificed a lot lifestyle-wise by turning to fulltime house/pet sitting to accomplish this, but also gained so much in terms of time to focus on getting done what is now truly happening, and I now have so many furry creatures to love. 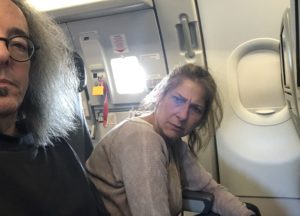 Former boss from my job at MTV (when they played music) who taught me how to make docs is now directing my film. And taking selfies on the plane.

Typical production projects I work on are handed to me with a budget, a concept, a company and core support systems in place to make things happen, and within those parameters the creativity with casting and story can happen.  With this film, though, I had the concept, the cast and the framework of the story, I just needed to figure out how to build the production up from scratch, start an LLC, find funding, negotiate prices with vendors, get paperwork signed, sealed delivered, etc, etc.

It seemed like an endless process, but suddenly we were there. One by one the things on my “to do” list got checked off, I was on the plane, the crew arrived, the first interview started, more conversations, it was done.  And I did occasionally think to myself – I did this.  I got help from generous donors, my A-team director Jon, co-producer, Jamie, and DP Chris, all people from different parts of my worlds colliding and all who have stepped up so tremendously to help. Because I asked.  That’s what was hardest to do but that’s what I did. 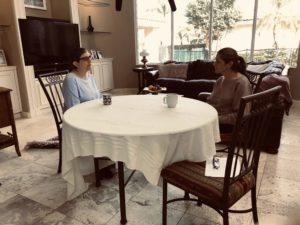 My sister and I having a heart to heart – finally making my grandmother’s wish for us to be close come true!

Above and beyond getting answers to numerous questions, assumptions, and perceptions I’d held for the 30 years my family spent in silence about my mom, what has meant the world to me is the constant support from them and others who see the of the value of having these conversations documented along with friends, strangers, suicide prevention volunteers, and all those I meet who have been silent about their own losses or suicidal crises who encourage my mission.

Our story is being shared as an example of many families who don’t talk about important issues and to encourage those still suffering in silence to share their story with someone.  Anyone.  It honestly never occurred to me to find people outside my family to talk to about this in the three decades I was acutely aware my family wasn’t dealing with it.  Finding those people at a charity walk opened up this whole new world to me and gave me the courage to then turn to my relatives.

With these interviews, we will be editing an official trailer to be completed by the end of April to use for three grant applications deadlines, to reach out to prominent loss survivors for help with funding and bringing attention to the film/cause, and to seek partnerships with documentary film companies.

To expedite this process, we are now crowd funding $5000 to film certain visuals and create elements to complement the storytelling in the on-camera conversations and represent the full film we envision!

Incentives for donors include

•. All donors, regardless of amount, are currently listed on our website memorial page as supporters of suicide awareness with the option of having a memorial credit honoring someone lost to suicide. Donations can also be anonymous.

•  Donors giving $500+ get memorial credit with a photo of their loved one.

•  Donors $1000+ get memorial credit with a photo & a short personalized message along the lines of “Forever in our hearts.”

Donations are accepted by the International Documentary Association* for payment as we are under a 501c3 Fiscal Sponsorship with them and contributions are tax deductible.

Thank you for any help you can give!  A little is a lot to a documentary filmmaker…

Please note the online donation form does not have a space to note any memorial information.  All donors will be contacted directly when we are notified it’s been received to get that and other credit information.