After the Pulse Massacre, LA Showed Its Pride

On June 12, 2016 I marched in the Los Angeles Pride parade with the Greater LA Chapter of the American Foundation for Suicide Prevention to spread awareness and hope in a community where suicide rates tragically run high.  Unfortunately, in the overnight hours before the event, the massacre at Pulse in Orlando took place. The parade organizers debated whether to continue with it, not only because of the horror, but because various threats against the parade were actively being investigated.

Like so many people marginalized and victimized solely because of their identity, the LGBTQ+ community rallied.  None of our chapter’s volunteers dropped out either, despite the anxious and subdued atmosphere.  The crowd was thinner than it typically would have been and security presence was quite visible, which was both comforting and disconcerting. It felt important to be there, especially because of the trauma of Pulse, to allow anyone wanted one to have a chance to express their shock, grief, anger and pride.   So many more people of all backgrounds, some targeted, some because they happened to be where one of these incomprehensible mass shooting events took place.

I believe the growing frequency of the the mass casualty events and random acts of violence  throughout the country are triggered by hate of the “other” and fueled by self-righteousness and entitlement.  I know because I have my moments too – I can hate with the best of them in the moment, but by not acting on that hate, I avoid killing or maiming.  Typically the intensity of my anger eventually either dissipates or at least subsides to a tolerable level where I can sometimes even understand the other side.   Acting out in anger or with malice, in my experience, has never brought a positive result and any satisfaction I feel in the moment morphs into embarrassment for how high the level of my anger reached, even if it was only expressed it my head. 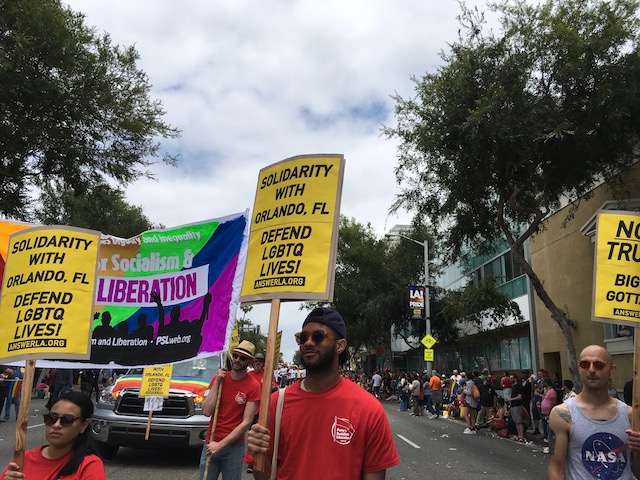 I am currently convinced I’m watching civilization devolve before my very eyes. It’s extremely scary and terribly sad, and has exacerbated quick-temperedness and reactivity for many, myself included, so perhaps it’s a chance to hit the reset button and really take a look at my own values and visions of who I want to be and the world I want to live in and act accordingly in all circumstances.

For me, the people showing up to that parade on the heels of the Pulse tragedy exemplified the importance of showing up and fighting for your rights, beliefs, and your identity no matter with a positive message that invites people to your conversation. Despite what had just happened, the messages at the parade seen on signs and the group chants were of love for all, pride in identity, and support for the Orlando community. Hate is not an option and rage is not the answer.