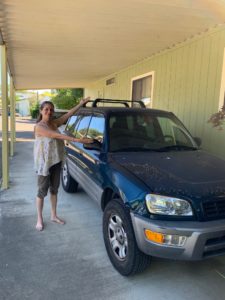 I have always loved to drive and am always up for a road trip.  For a time I thought about being a truck driver so I could just drive and listen to music all day.  Unfortunately, that dream died due to my aversion to driving large vehicles, discovered when I was forced to drive the family ’73 Chevy Station wagon instead of the ’72 Chevy Malibu I was used to.  That was big enough. Thirty-seven years later I have owned 3 cars in my life.  Two were small Toyota Tercels from around ’86.  Then on July 3, 2000 came the Rav4.  My dream car.  My travellin’ buddy. My rock.

As soon as I moved to LA and became aware of Rav4s I wanted one.  I had never been in one but they were cute.  I liked that they had the SUV style and sat higher than cars, but seemed to be of car-like size.  When the used Tercel I bought upon arriving in LA gave out, I went to Toyota, sat in a Rav4 and knew I had found “the one.” The all-important-to-me feature of seat to dashboard height was perfect and when I drove it, it handled just like a car.  I was ready to buy.

Because I can be impulsive, the friend I brought along to check me on that strongly suggested I test at least one other vehicle to be sure.  I reluctantly agreed and went to Isuzu because of the cute-factor of the Amigo.  The second I sat behind the wheel I knew it wasn’t the one.  It felt truck like and it drove truck like.

Back at Toyota, I was checking out all the options, mentally prepared that it would have to be ordered.  When I decided on Mystic Teal Mica for the color, I was stunned that they had one on the lot, with the basic package I wanted and 7 miles on the odometer.  It had arrived that day or the day before. I drove it off the lot, rolling it into double digits to 11 on my way home.

Over these last 19 years and 196,000 miles, the car has become a significant part of my life and my identity.  It is a comfort zone and I am emotionally attached.   I think about all My Rav and I have seen and done together.  It has taken me on many adventures, especially when my dog Riggs was alive.  We went to the snow, the beach, the desert and cross country for a job in Florida.  It’s transported me to numerous jobs, meetings, events, and driven through many fast food restaurants.  Most of my California memories include my Rav4.

It was the first big thing I bought and paid off, securing it’s place as the one , and made the car the one and only  tangible piece of stability I had as a freelancer.  It represented freedom and escape.  If I had enough money for a tank of gas, I could get somewhere else.  I had no plans of where I would go or how that would help, but knowing I could calmed me. Now that I mostly petsit in other people’s lovely homes while they are away, my car is home base.  It helps carts my things from place to place.  I pack it up, drive the 5 or 10 minutes to the next house and unpack it. We are a team with a system.  It gets me.

The few problems I’ve had have been the expected problems that come with an aging vehicle, but costs have still been much less than a new car payment would be each year.  I am firmly attached and hope to drive the car forever.  We just drove up to wine country for a 2 week cat sitting job (I am a lucky, lucky girl!)  Ours is a true love story.  We’ve come a long way, baby!  Let’s keep rolling – I can’t wait to see where we go next!

When I moved to Los Angeles in ’97, I bought a used Tercel because it was familiar and I had loved my first one.  It came from Memphis, TN, bought when I left school after my mom died and moved in with my dad. It was cute (very important to me), easy to drive, and had a small turning circumference.  That’s the selling point I remember the dealing pushing and still think about anytime I’m trying to do a u-turn.

My attachment to the car – and the freedom it represented – convinced me to take it to NY when I moved there and store it near the studio I shared with a friend, a move which essentially doubled my rent.  But I made use of it, leaving the city frequently for mini-adventures to Connecticut, New Jersey, or the Hamptons because the girl with the car gets the invites when friends with rich bosses get the housekeeps for the weekend!  I used the trunk for extra storage.  Finally I sold the car to the guy that ran the garage where I parked it.  After a few years, my work became life-consuming and I rarely used the car.  About the third time I had to get the battery jumped, he pointed out to me how much money I was wasting and offered to buy it for a niece going to medical school.  He made it easy and for a nice reason, so I let go.

The LA Tercel lasted about three years and died a sad radiator involved death along Santa Monica Blvd just past Highland.  Luckily I had just started a new job that gave me good standing with the car loan people so all I had to do was choose.

Before I moved to LA, I was certain I’d get a Mazda Miata, but as I saw them on the roads they just seem small and vulnerable.  All the SUVs made me want to be high up but I didn’t want a big vehicle or anything that felt like I was driving a truck. It felt like an overwhelming decision right off the bat and I didn’t come to LA with a job, so I quickly defaulted to the Tercel.  And I was happy.