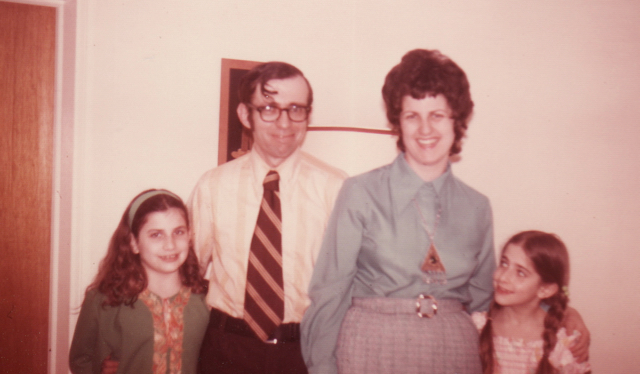 “One’s deepest wounds integrated become one’s greatest power” are the first words I wrote in the lovely blue journal I received upon checking into the Our Journey Continues conference, an event organized by the American Foundation for Suicide Prevention. In a welcome speech, Mariette Hartley shared these words spoken by her good friend, former actress and current nun, Delores Hart. I got it. So did the 200 or so other people in the room. That is why we came.

This was my first experience as a conference attendee. The fact that it was the first one focused on long-­‐term survivors of suicide loss gave it special significance as the culmination of a year of many personal firsts in my own journey.

The long road that led me to this conference began on January 15, 1985. I was 19 and a sophomore in college. I was called to the Dean’s office and told, “Your father called with some very bad news. Your mother killed herself this morning.” The words, the concept -­‐-­‐ and suddenly the world -­‐-­‐ made absolutely no sense to me.

At home, my father told my sister and me the facts of the day. We read the note. I sat in the kitchen listening to my father make calls, developing the story of who my mother was and the theories about her death. Eventually I locked in a succinct, tidy version that allowed me to believe I understood.

Once she was buried, no one in my family spoke about my mother’s death again -­‐-­‐ at least, not to each other -­‐-­‐ and rarely even mentioned her. No one said not to; we just didn’t. The day after her funeral, my sister and I were returned to school and encouraged to simply move forward. My father had grown up following that way of thinking and it was what my mother would have wanted. In a family of doctors, social workers and teachers, we helped others. We didn’t need help ourselves.

Suddenly left to my own devices, I decided not to be a doctor, social worker or teacher, so the first motherless “adult” decision I made was to quit college. I forged a career in TV: first in New York and then in Los Angeles. Life has had great moments, and really sucky ones. I occasionally tried therapy, but always split with the therapist, insisting I needed help with the crisis du jour, but never to deal with my mom’s death. I intellectually understood it, so I figured it couldn’t be a problem. I kept moving forward…gradually becoming a depressed, burnt-­‐out freelancer, and finally rolling into a giant panic attack in a Target.

Isolation became my full-­‐time hobby. Therapy, medication, painting, and mindful meditation helped me wobble back to life. I slowly woke up to the fact that not dealing with my mom’s loss, struggling through the aftermath alone and in silence, had created this perfect storm of pain.

Last September, as I was turning 50 and contemplating the meaning of life, I decided it was time to change things up. My career as a TV producer was built on telling other people’s stories. Now, 30 years after the fact, I became curious about my own. I realized how much info was missing from that little narrative in my head, formed in the day or two after my mother died. I began grief counseling and joined my first support group. I dedicated myself for the first time ever to a cause, actively volunteering with AFSP’s Greater Los Angeles chapter. I recently joined the chapter board: my first such honor!

I discovered for the first time how different and easy it was to talk to others who had faced suicide. The openness and insight of the group’s newly bereaved allowed me to truly grieve for the first time. I saw first-­‐hand how sharing my experiences could offer comfort and hope to others. I‘ve begun filming a documentary to examine my family’s story. This summer, I recorded an initial round of conversations. They were highly emotional and incredibly illuminating, considering that I had never known how most of my relatives had responded to my mother’s death.

My friends tell me I seem lighter. I feel lighter, and purposeful, for the first time in a long time. Working in world of suicide is making me happy.

Being in the company of long-­‐term survivors in Chicago at the conference was an even deeper manifestation of the camaraderie that exists among all survivors. Most of us were meeting for the first time, but the vibe felt like a college or camp reunion, with a deep connection of shared history.

All the wonderful speeches reflected the eagerness for learning, teaching, helping and healing that I came to be a part of. The list of presenters was an impressive ‘who’s who’ in our club. Every breakout session topic was enticing, representing how unique our grief is while offering constructive ways to live and work with it. I was also inspired by the creativity, intelligence and passion all the attendees brought to the topics.

I shed some tears, but best of all, there was way more laughter than I would have imagined. That is my preferred way of coping and connecting, but I have learned to be sensitive at survivor events. Its presence was welcome and a relief. The primary goal of organizers to have us network was beyond successful: I exchanged at least 20 numbers and hope to see the same people again and again as the movement gains traction.

This was the most validating experience of my life, a confirmation that I have finally gotten myself to the right place, at the right time, doing the right things. It is thrilling to think of being part of the start of a movement. For the first time, I am moving forward towards something. I am turning my deepest wound into my greatest power.

P.S.: This was my first ever blog post! Who knows what’s next???